Since the beginning of gambling there has been the question of whether the game you are playing is fair, random and not designed to simply rob you of your money.

This is why eventually, regulatory bodies started to require casinos and game providers to have their software regularly tested for randomness at third party companies.

But this did not give players  much confidence because they still could not see randomness being proven with their own eyes.

Then, about a decade later, blockchain technology, the mother behind Bitcoin and other crypto currencies, provided the solution.

How Does Provably Fair Work

Blockchain is a chain of data linked together with cryptography. Each block contains a so-called ‘cryptographic hash’ of the previous block. This means that if anyone changed a block of data (to stage the results so they work in their favor), you would be able to see it; it would differ from hashes in other blocks. 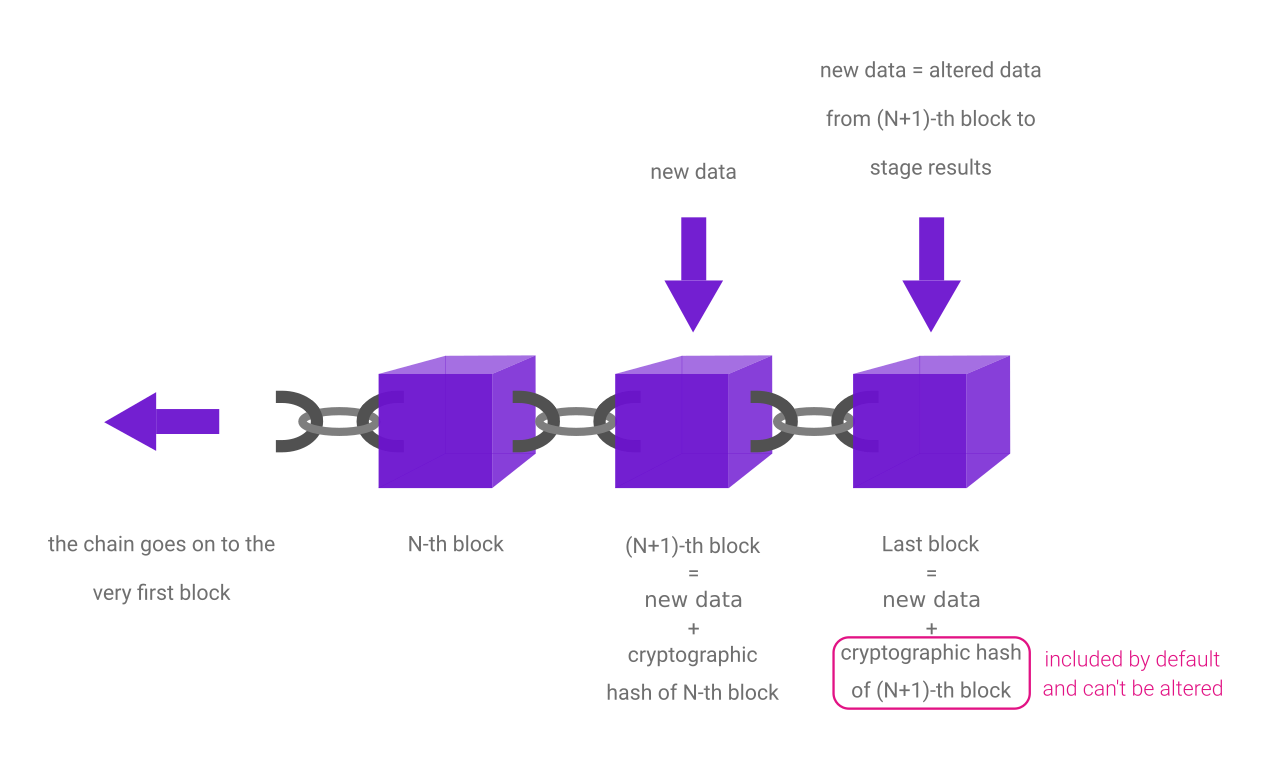 Don’t worry if this sounds confusing – we are going to go over this step by step and you will see what it all means.

Using the same blockchain principle, provably fair casino games provide you with a so-called ‘hash’ before each game round begins. The hash is an encrypted outcome of the round which is about to be played out. You basically get the result of the game beforehand, but it is encrypted so you cannot decipher it and use it against the casino. At the same time, the casino cannot alter the results because you already have them.

Thunderpick has 2 in-house games, Spin and Crash, which are both provably fair. Let’s use Spin as an example. 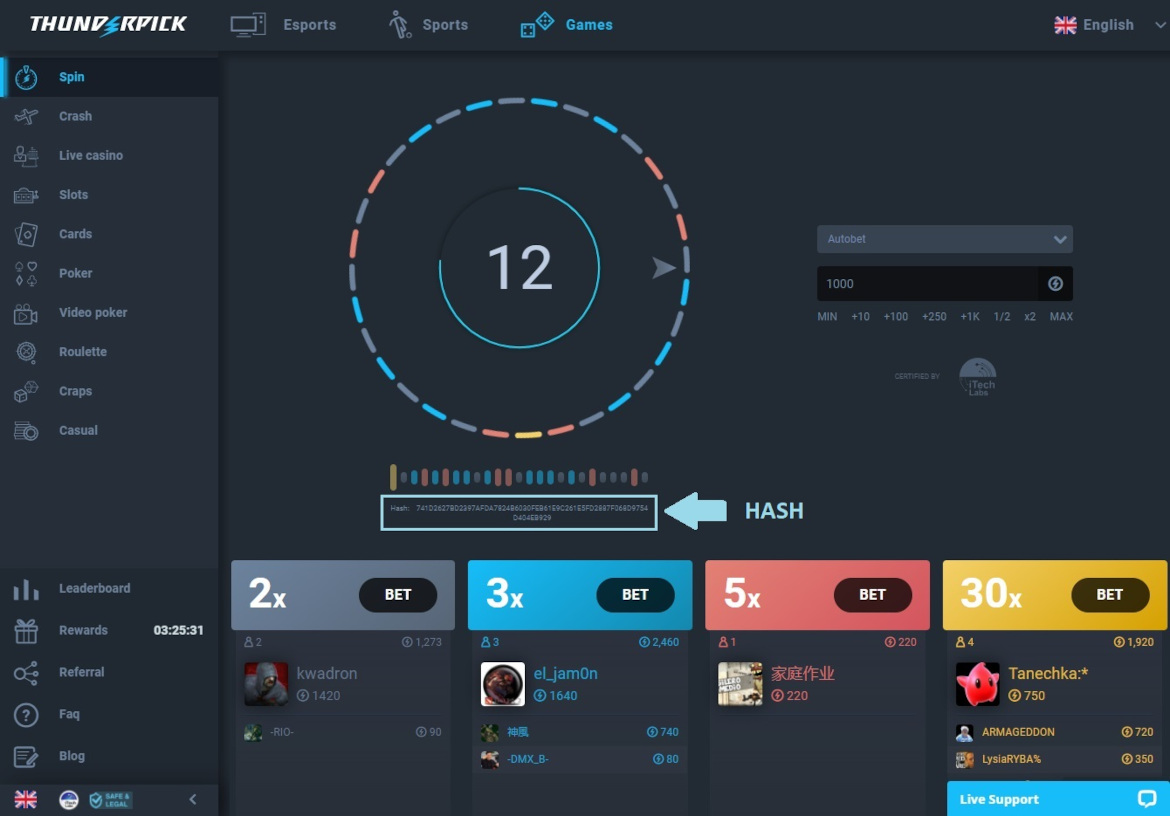 Before the round begins, the game provides you with the hash which is found below the wheel (look for the long and weird looking sequence of letters and numbers).

In this case the hash is:

As weird as this character sequence looks, it holds the result of the next round.

Then the wheel spins and when it stops, you are given a new hash for the next round and an un-hashed result of the game, which is basically a decrypted version of the hash you got before the round. 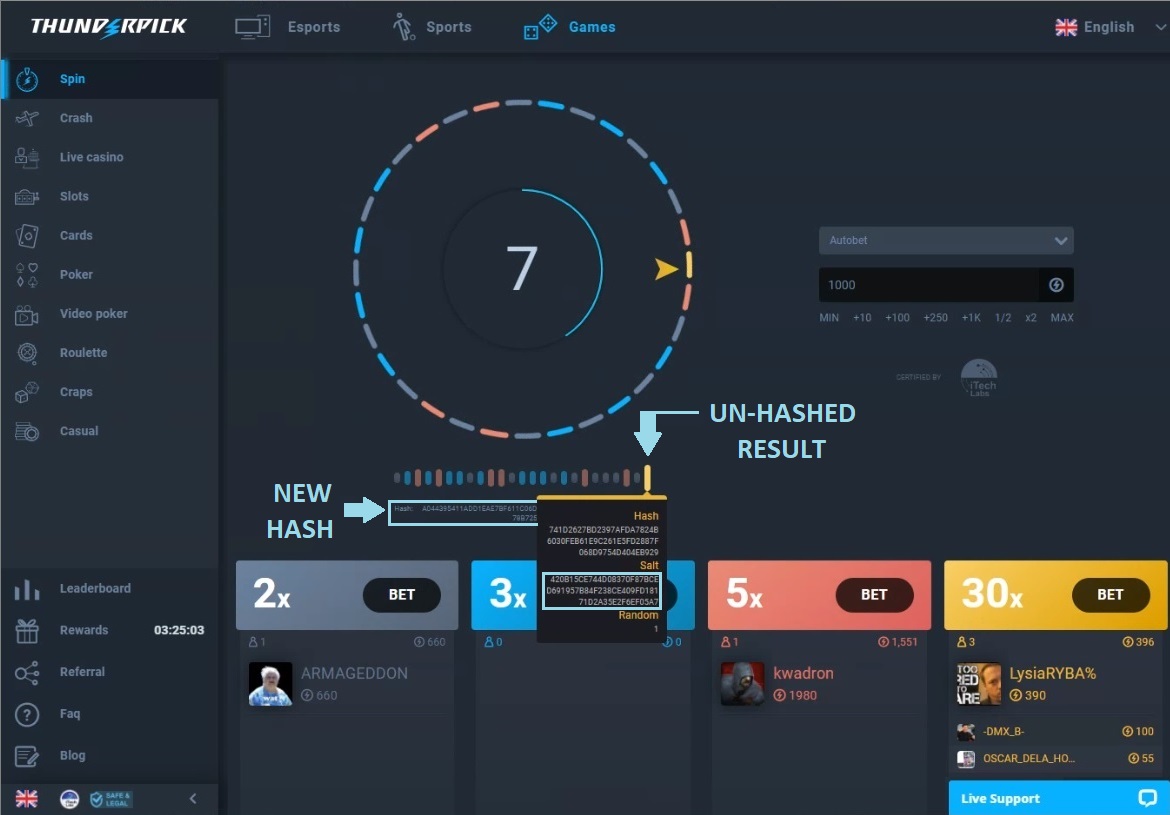 In the game of Spin, you can find it below the wheel and above the hash for the upcoming round. By hovering your mouse cursor over the last vertical line that represents the last result, the hash, salt and result are revealed.

The hash here is the same one as the one you got before the round. ‘Salt’ is just a name for the un-hashed result of the game round.

In this example, the salt is:

and the actual result is 1.

You do not have to believe the hash written here (in case you are worried that someone changed it to mess with the result) because you copied it down before the round started.

And now, the only thing left to do is see whether the result is the same as the hash you got before the round began.

You can check that by using a ‘hash calculator’ from Xorbin. This calculator uses a mathematical function to encrypt data. Since you have the un-hashed result (salt) and the actual result (1), you can use the calculator to encrypt them and see if they are the same as your hash which, again, is only an encrypted version of the result. 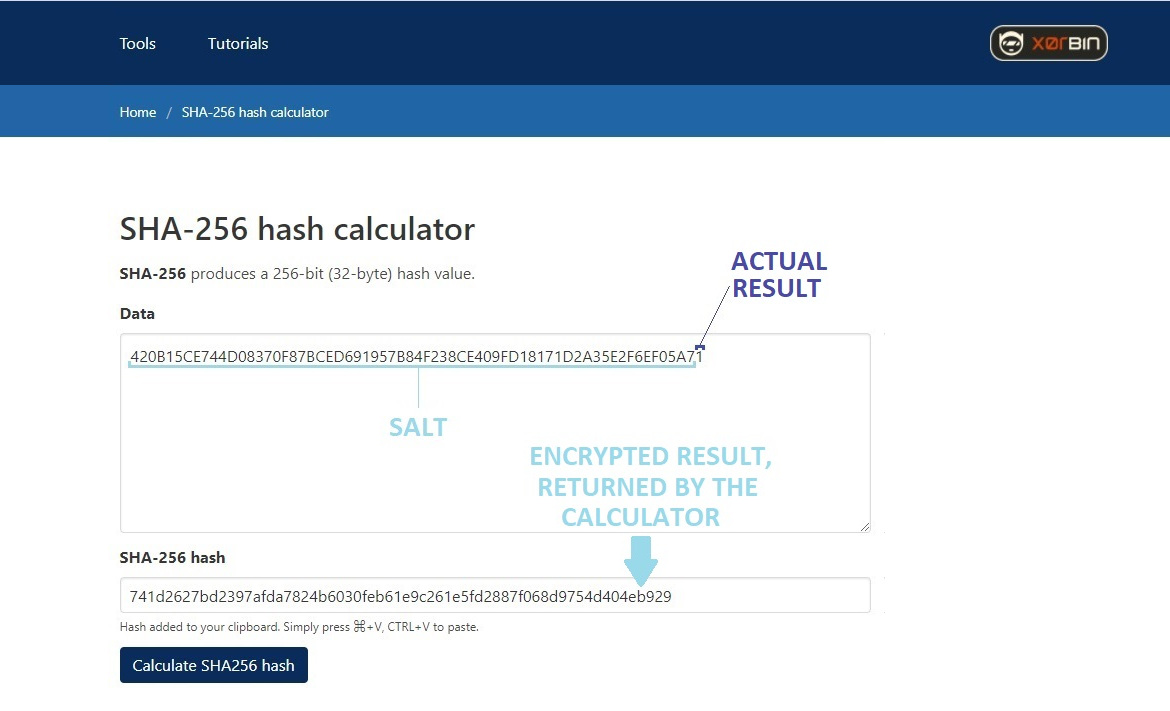 By entering first the salt and then the actual result after the salt into the ‘Data’ field and then clicking ‘Calculate SHA256 hash’, the calculator will return the encrypted version or the result which should be equal to your hash.

… you can see that they are the same (hash encrypting is not case-sensitive, so upper or lower case letters mean the same). Congratulations, you have just proven fairness of the game round you played!

Is It Really Fair

If at any time during the above process you asked yourself: ‘Can I trust the calculator?’, then your question is completely justified!

After all, if you want to be the one proving fairness of a game instead of a third party company, then you must be able to have control of the whole process.

In this case, the explanation is much simpler: Unlike a casino game where you need specific software knowledge to develop and understand it, anyone with basic programming knowledge can write their own SHA-256 calculator, and since the calculator uses specific mathematical functions any such calculator will produce the same result.

If you don’t believe it, here are some other calculators you can try:

Another thing worth noting is that there are lots of different versions of hash which can be used to encrypt data. But in this case SHA-256 must be used because the game uses this kind of hash to encrypt its results.

If you are one of the players who are rightfully worried if the games you play really are fair, then you now know that Thunderpick is a place where you can take control of your own verification.

After all, there is a reason why Thunderpick is one of top casinos with provably fair games!

Halloween casino promotions burst out at the end of October, just when things get colder, spookier and full of tempting spices all around. If you're among those who enjoy this pumpkin-filled time o... more

I recently decided to test 6 most popular roulette strategies to see which one performs the best. So I tested each strategy one million times. more

Why Are Card Tables Green?

Have you ever wondered why card tables in casinos are green? more