What Causes a Change In Fees?

If we take Bitcoin as an example, its fees are based on the amount of data that a transaction holds. This is determined by how many inputs and outputs the transaction has, which means that large transactions require a higher fee as they contain more bytes of information.

The more important factor for fee price is market congestion. Since block space is limited and one block is mined for around ten minutes on average, people try to outbid each other to secure their place in the next block. With a coin like Bitcoin that has a 1MB block size, congestion is the biggest reason for price spikes in its fee. If you set a low fee because of the long block time, being put to the back of the line could mean very long delays. 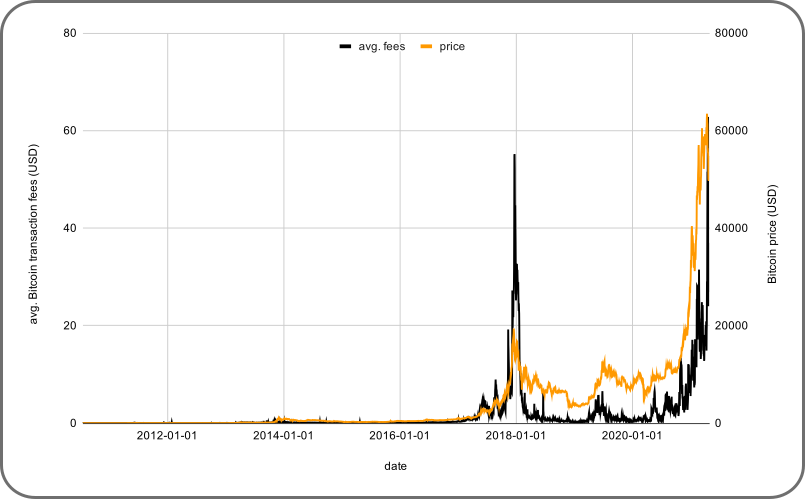 Then why does it appear as if the value of Bitcoin dictates its fee?

Because it still does. As Bitcoin’s value rises, so does the interest in the coin. What follows is an influx of new people, driving traffic to new highs, leading to a rise in fees. Bitcoin’s price is very much an influence on its transaction fees.

In 2021, a repeat of 2018’s rise in transaction fee costs can be seen across most cryptocurrencies. The rise is most noticeable in the case of Bitcoin, where the average transaction fee has at one point even reached $60, but is now hovering around $20. Other major cryptos are following this trend, effectively making smaller transactions completely nonviable. 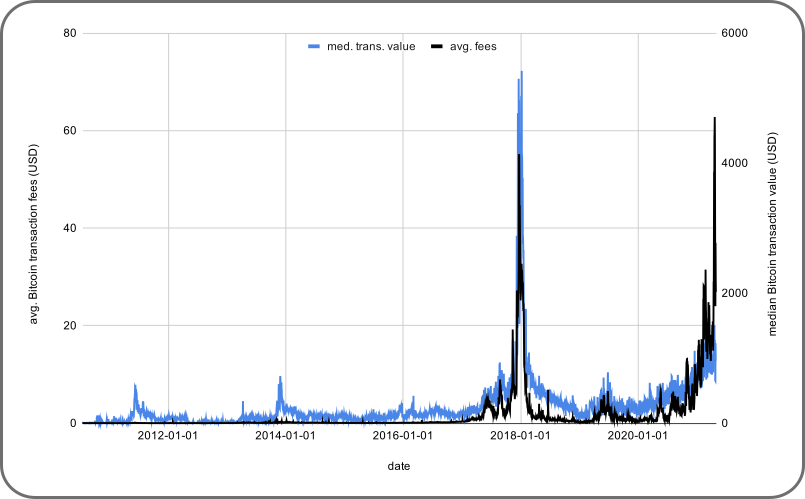 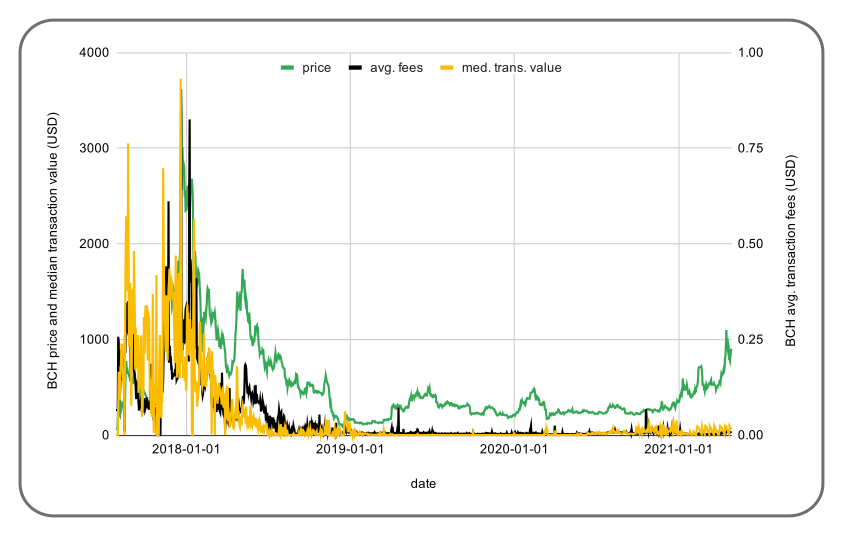 If we look at a cryptocurreny that promises cheaper and faster transactions, such as Bitcoin Cash, data shows that it is being used more for smaller transactions, at a median transaction value over the same period of around $75 at a $0.007 average fee.

Bitcoin Cash transaction fee is, after an initial period after being introduced, consistent. It does not fluctuate as much as Bitcoin’s, for example. This is because of a larger block size, which means a higher limit on the amount of transactions that are confirmed. This leads to less competition when it comes to fast confirmation. This pairing is also a good indicator of the importance of block size, as the average block time is the same at 10 minutes, yet BCH fees are tiny compared to BTC fees.

If Bitcoin, Ethereum and other cryptos with high transaction fees are taking the center stage, it si hard to see cryptocurrency as digital cash, and if fees associated with these currencies continue to rise, cryptos like Bitcoin are destined to remain only stores of value, not a currency for everyday use.

This is where other cryptos can make a break through. If we look at cryptocurrencies like Bitcoin Cash, Litecoin and Dash, this use case scenario is exactly the one they are tailored for. Since these cryptos are fast and cheap, transactions with such coins are ideal for sending smaller amounts.

Ironically, the biggest crypto hit of 2021, Dogecoin, is not optimized for low transaction fees. Furthermore, the massive influx of new people has sent the average fee skyrocketing, as it means many more transactions. Along with a general rise in value, this places Dogecoin in the bracket of coins used for sending large amounts of money.

Why Use Cryptos With High Fees?

The most important advantage of coins like Bitcoin and Ethereum is security. This is also the reason why sending large amounts of money makes sense with these currencies, as sending $1,000 and paying $30 for transaction confirmation makes sense for ensuring that your transaction is safe.

Cryptocurrency networks that promise small fees and fast transactions are often less secure. This is a problem especially with Bitcoin Cash, as it is considered to be so insecure by exchanges that the amount of confirmations required for accepting a deposit is so high that the time advantages of fast confirmations are lost. Dash works around this issue with “masternodes” – special nodes that process transactions either extremely quickly or with an emphasis on privacy, breaking transactions into smaller amounts and scrambling the information to make the sender and receiver anonymous. Transaction fees associated with Dash are also consistent and low, having stayed stable since the high of 2018. 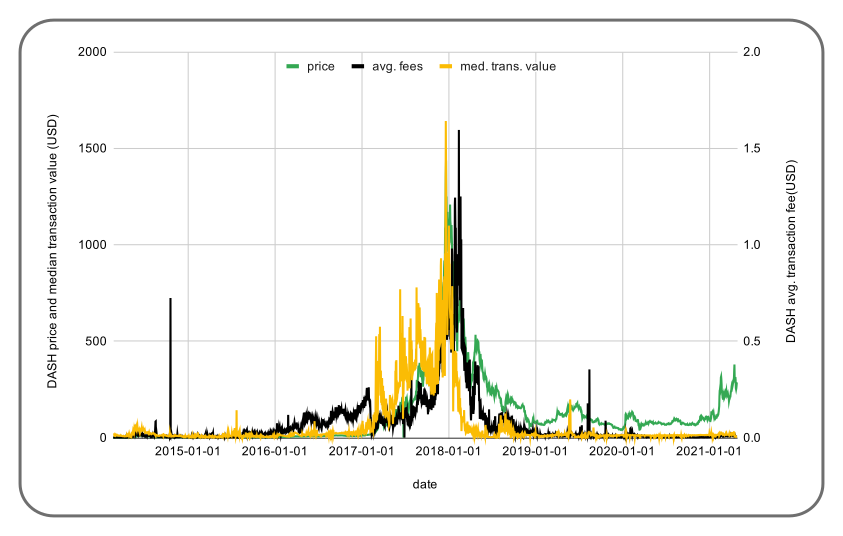 Why Even Pay a Fee?

In most cases the currency’s value influences fee pricing, so it makes sense to think that stablecoin fees must be fixed. Fees for coins with stable value like Tether are still subject to fluctuation as transactions must be confirmed in the blockchain. In Tether’s example, many users are moving off the Ethereum blockchain with smaller transactions because fees are too high. They move to other blockchains like Tron, for example (Tether can be used on different blockchains).

There are, however, cryptos with no fees. The one worth pointing out is Nano. It is the most well-known among fee-less cryptos. In a broader scope, it should be more appreciated than it is at the moment. Along with $0 transaction fees, Nano takes only a couple of seconds. It confirms transactions with something called Open Representative Voting, making the system lightweight, energy efficient and very fast. Its security is also well integrated. For ultra-fast and cheap transactions, Nano takes the win.

Right now, most major cryptos are used for large transactions as their fees are so high that small amounts could cost you more in fees than the amount you are actually trying to send. Considering that this has already happened in the past and is happening again, a consistent rise in fees makes it apparent why many see cryptos only as “digital gold” – not something to be traded in on a daily basis.

Other coins present a solution to this by being designed to guarantee smaller fees and faster transactions. Yet they often suffer security concerns, resulting in smaller transactions. There are even coins with no transaction fees, but they are not as popular as others; mainly since they are relatively new.

So, is buying something like a cup of coffee with crypto realistic? Definitely, but most likely not with Bitcoin, unless you want to pay 10x its price or a week in advance.

Although the rising and falling of Bitcoin’s price is a constant quarrel between believers and skeptics, the last drop of over $15,000 in one week is a clear indicator that something larger may be ... more

Shall We Thank The Federal Reserve for Our Cryptocurrency Profits?

In April 2021, the cryptocurrency market exceeded $2 trillion for the first time. The price of cryptocurrencies has grown consistently after September 2020, and it saw a peak less than a month afte... more 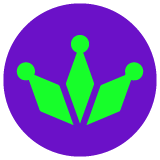